Over the last 50 years sculpture has been dragged from its pedestal. Not just in the last days of idolatry in Iraq or the Soviet Union with crumbling, dented, smashed and junked monuments littering ravaged streets, and empty plinths left behind, but in the dissipation of traditional sculpture into a contemporary art of assemblages, scatter-pieces, piles, and stacks, of common and cheap materials strewn across galleries and museums, which are, quite purposefully, ‘unmonumental’.

As the New Museum put it in its summary account, the arguably decrepit and less-than-substantial appearance of unmonumental art means to capture “the extreme delicacy and fragility of life in the twenty-first century”. It could express the failure of a single politic or unifying dogma (that is, we have no single thing to exalt or put on a pedestal), or it may reflect the tenuous and fragile complexity of meaning, which is always tentative, provisional, qualified and specious, always contradicted or challenged by others.

Hany Armanious certainly seems to qualify. Critics agree his work looks like ‘hard rubbish, “old junk”, “ignored broken and useless objects”, “the most ordinary, the most expendable and despised objects”, “overlooked or near-invisible”, and “of zero spectacle value”.

Blobs of distended, molten coloured plastic, like viscera or entrails. Gaudy oversized, inflated and mutated foodstuffs. Upside down, op shop glassware adorned with their inverted hollows or assorted pepper grinders with their insides out. Clouded, roughly-set urethane or incomplete pewter castings, like rejected, imperfect first attempts at copies of objects, reproduction objet trouve, faux versions of faux trinkets, neither impressive nor entirely substitutive due to the rough edges and technical imperfections. 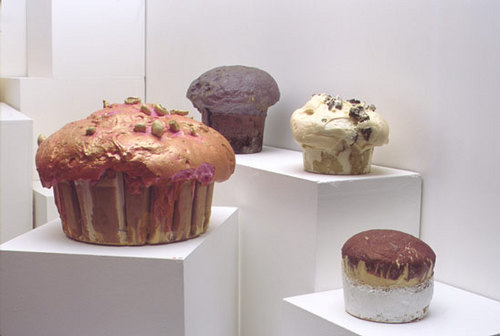 All this stuff variously set on top of cardboard boxes, upturned bread-crates, wonky tables from the scrap heap, commercial shelving, a bedside dresser, a hallway cabinet.

Obviously, these are curious aesthetic choices, comprising an odd intention for a visual artist, since while they do seem junky they are not exactly ugly, while the combination of disparate objects is whimsical they are ultimately impenetrable, while there are occasional art historical references they seem more driven by caprice.

Critics diverge on their interpretation; some find the work ironic, others fatuous. Armanious himself defers “I actually don’t expect people to be able to access the work” and professes a horror at being quoted about his work.

Clearly we seem to be at some kind of tipping point, where the reduction of representation to its constituent materials and forms – if that’s a trend over decades – has now reached a point of insignificance. Whereupon chance may once have provided the means for artists to choose a path and generate new qualities and values, random carefree selection these days seems to render ‘indifference’ as the trope du jour. 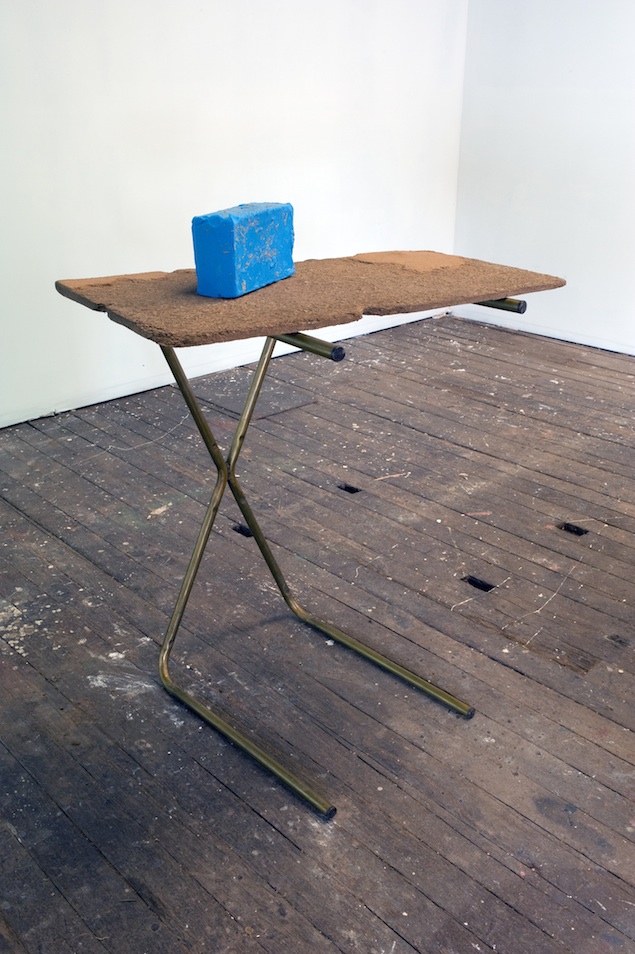 Although Armanious’ work looks like rubbish, much of it – and lately, nearly all of it – is cast. So while he seems indifferent to aesthetics, clearly he is dedicated to the craft and larger question of reproduction. In casting this retinue of worthless seeming found objects (creating meta-trouve), and in occasionally using a more expensive substitute material, he is posing a more general question regarding the question of form where the actual or ultimate form is not the point (though it references both Pop and readymade material transitions), but rather the forming. And the more anonymous or anodyne the form the better – since this avoids the distractions of connoisseurship, since it’s about the alchemy before commerce or history kicks in. 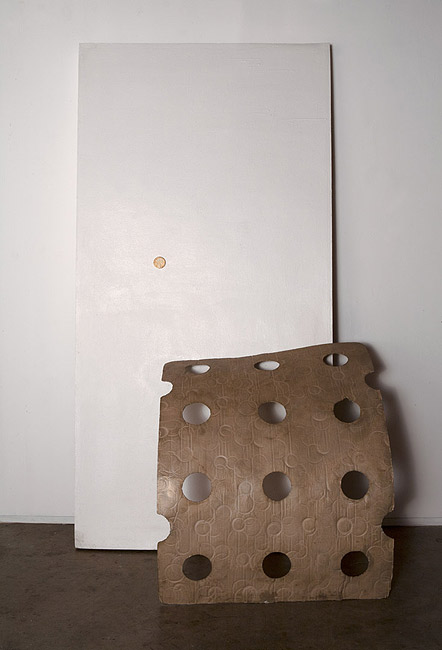 Armanious returns to the originary moment when the formal attributes of sculpture first begin to bump and jostle and settle around an idea, searching for the right shape, weight, mass, texture, scale, colour, in order to represent that idea; when those first choices were made by the hammer and chisel, when the molten metal began to run like a liquid, or a mud slip filled the simplest mold.

Indeed, casting has become Armanious’ principal method because it is one of the oldest means, and also a perfect foil for the question of origins. As he says “all the experiments have to do with filling an empty cavity with the substance to try and solidify something that we can’t really understand or know.” And casting asks of everything cast, “how did you get your shape”, and “what is the proper form”? 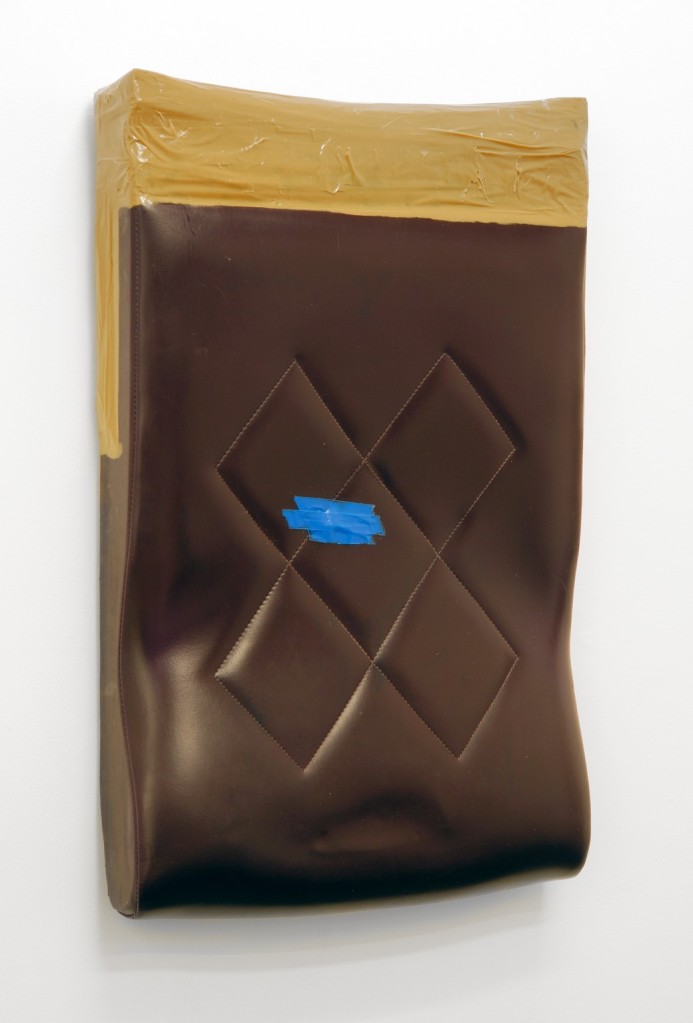 The oldest extant casting of a frog in metal from 3200 BC must have first struck our forebears as a magical transformation, wherein the shape of one thing was given alternative materials. Within that grand technical tradition, Armanious’s DIY – and constantly improving – casts have deployed a range of unlikely materials to occupy some of the nooks and crannies around him, perhaps seeking to rediscover in contemporary materials the fundamental alchemical magic of those first representations: pouring hotmelt into glassware or water, expanding foam into muffin trays; air in glass; pewter into peppercorn sacks; urethane into all kinds of molds.

In making casts, Armanious intends to unwind things to a point at which they just coalesce, and the merest, passing thought will do to recombine them, like the small idea that a clapper in a bell is similar to a spindle in a pepper grinder. Or finding in a muffin tray the perfect match for expanding foam. Some have called it ‘slow’, but it borders on ‘stoner’. Amanda Rowell described the work’s internalized well as “a concentrated expression of the characteristics peculiar to the medium itself as it occupies space”. 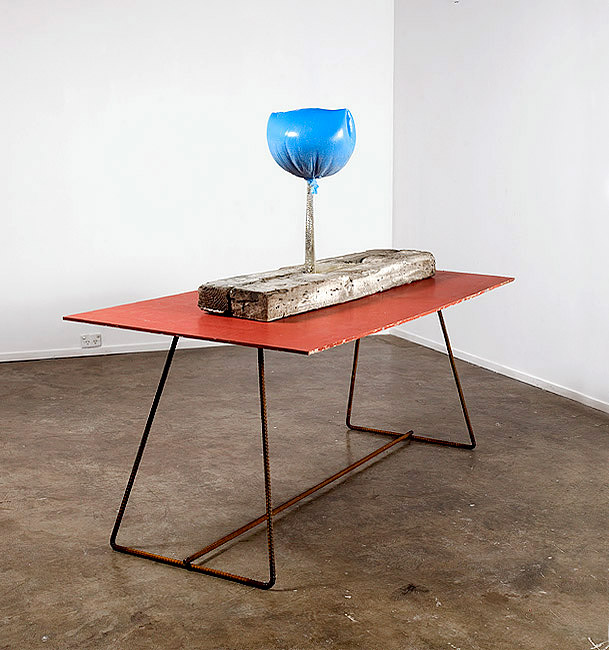 In light of which, Armanious’ works appear not so much unmonumental or de-monumentalised, as pre-monumental, where the value of one thing or material is equal to any other, since it is addressed to the space between all found things and their reproduction and re-constitution; the very precondition for their representation.

Armanious’ point is generic and his purposeful indiscrimination – as if any and all things are candidate – makes of his individual works merely instances of a larger scheme to cast the entire world, and in rendering that most banal simulacrum, to reveal and delight in the essence of any and therefore all appearances; to rekindle the providential magic of the first bronze frog.