His deterioration mediated through countless other mediocre meaningless ailments that in reality only signaled the loss that comes with aging a loss he grappled with contradicted was resigned, and rebelled against every day, 2009 varnish on canvas, 200 × 200cm

I can’t believe that all that paint and varnish, glistening ‘wet’ and sitting in discernibly deep pools on the surface, is hanging there vertically in front of me in solid state. It defies gravity. Indeed, the most amazing works look gaseous, entangled vaporous mists that have been instantaneously arrested in clear acrylic, like photographs of space snapped from Hubble. It hasn’t always been the case, with prototypes taking a year or two to dry, sagging toward earth, some dripping to the floor during exhibitions. But since the late 90s Frank has experimented with technical developments in materials to perfect the varnish works on canvas that he is now most famous for; works that seem to happily – impossibly – combine the three molecular states of matter. 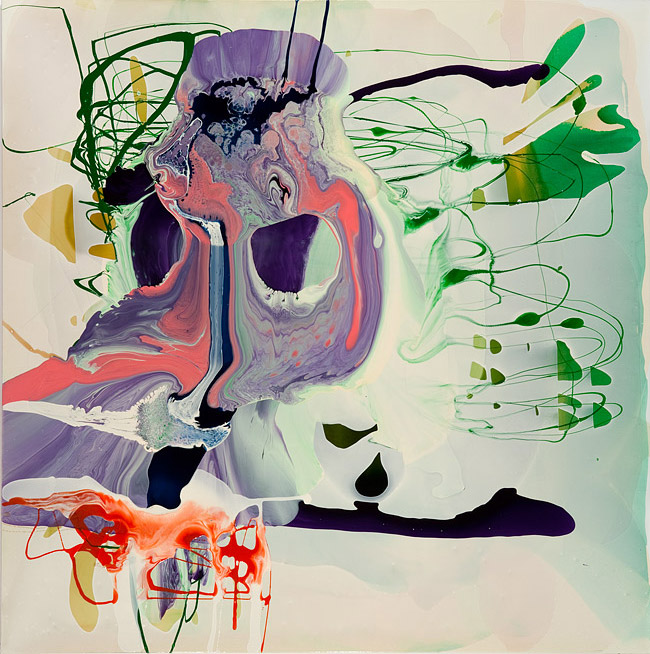 Perhaps early signs were there in landscapes from the 80s, the smeared, blurred forms resembling waterfalls or lakes, where the treatment of the paint (smudged and mixed under force of a palette knife) redoubled the physical (soft and pliable) state of the subject; the liquidity of paint not only resembling a body of water, but sharing its physical properties.

Since 2000, I’d suggest, Frank’s paintings don’t depict, or represent anything. Rather in a scientific sense they illustrate the behavior of different painting materials, in isolation or in combination with others.

As her black keyhole eyes sucked his universe swirling to some other side, 2012 varnish on canvas 160 × 120cm

Frank’s technique involves pouring paint and pigmented varnish on to horizontal stretchers and then titling or propping the support to mobilize and intermingle the liquids, all the while watching, waiting and to some extent trying to control the chemical and physical reactions. 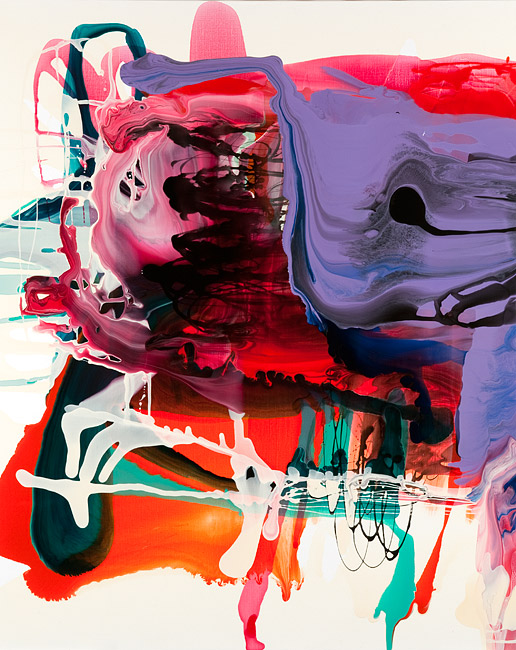 It can take 6 hours in summer, 24 hours in winter. Temperature, humidity, viscosity and density all play a determining role in the final work. Indeed, Frank sounds like a pioneering chemist when he describes ‘at least twelve responses and reactions that I have been able to observe and replicate on demand’.

Of course, the varnish is everything. It is the transparent solution in which pigments combine and in which they set and appear magnified to us in the final clear resin. To paint using varnish as Frank does is to reveal the chemistry – expose the reactions – that typically make paintings by substituting a clear medium for an opaque one. Indeed, what would normally occur off-stage on the pallete, is moved to centre-stage, as the main act. 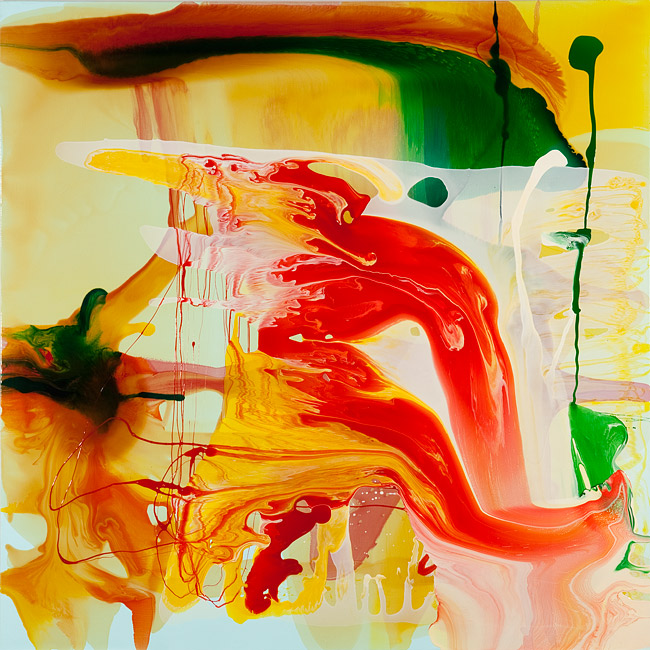 The Washington Colour School came close. ‘Thin it’ said Kenneth Noland, ‘Thinness reveals color.’ He and Morris Louis thinned their paint to stains, and reduced painting to its translucent essentials, wherein it was possible to see the colors mix, the edges meet, and the specially made Magna paints (the first acrylic and miscible with turps) bleed into the raw untreated canvas.  Frank’s is a more volatile concoction deployed for more spectacular ends. Pigments, oil, resins and solvents, not reduced, but layered; not just side by side, but one on top of the other. Not all are miscible, and some react. The results directed by Frank for up to a day are a melodrama based on the zeroth, first, second and third laws of thermodynamics, with the rise and fall of energy across the surface, and a (grand) final equilibrium hardening on the stretcher.

Linton Briblecombs beetroot paddock looking south to the Learchs and Mulgowie May 2004, 2004 varnish and acrylic on canvas 200 x 260cm

The works’ titles remind us of Frank’s creative intercession in these chemical exchanges: snippets from life conversations, things read, influences at large, big and little ideas that might suggest a subject, but perhaps better reflect the life of the artist in parallel – forming a montage whose doubtful inherent logic might still truly reflect the chaotic complexity of influence.

Indeed, of all the things running through our minds everyday, only some cross the liminal threshold into speech or writing, or, in this case, the title of a painting. And these concatenations in Frank’s mind, these synapses, which are then set in language compare to the reactions fixed upon his canvases, chemical reactions within a continuum of matter.

She was cross-eyed her pupils were barging into each other as if looking for a fight, 2012 varnish on canvas 200 × 200cm

Which is perhaps what Frank means in rendering the landscape ‘instantaneously and simultaneously’, not only as a representation but also an example. Australian critics can find a landscape in anything, like religious fanatics searching for the face of Christ.

But if Frank’s canvases remind us of a mindscape, fields of golden wheat, the BP before the turn-off for home, or Hubble images it is not because they are depictions, that is, because he has painted an image of ideas, the places we live or deep space, but because he has harnessed the same entropy – the same chemical reactions – across his canvases that play out across the universe.