Callum Morton was born the day Le Corbusier died. The son of an architect, he studied architecture but dropped out to become an artist, which explains his critical relation to architecture (especially modernist architecture), as an Oedipal drama, an avantgarde succession, and a generation gap. He’s been creating scale models and images to illustrate the demise of well-known architecture, returning what has been repressed in its history to suggest an unconscious underside to the canon. 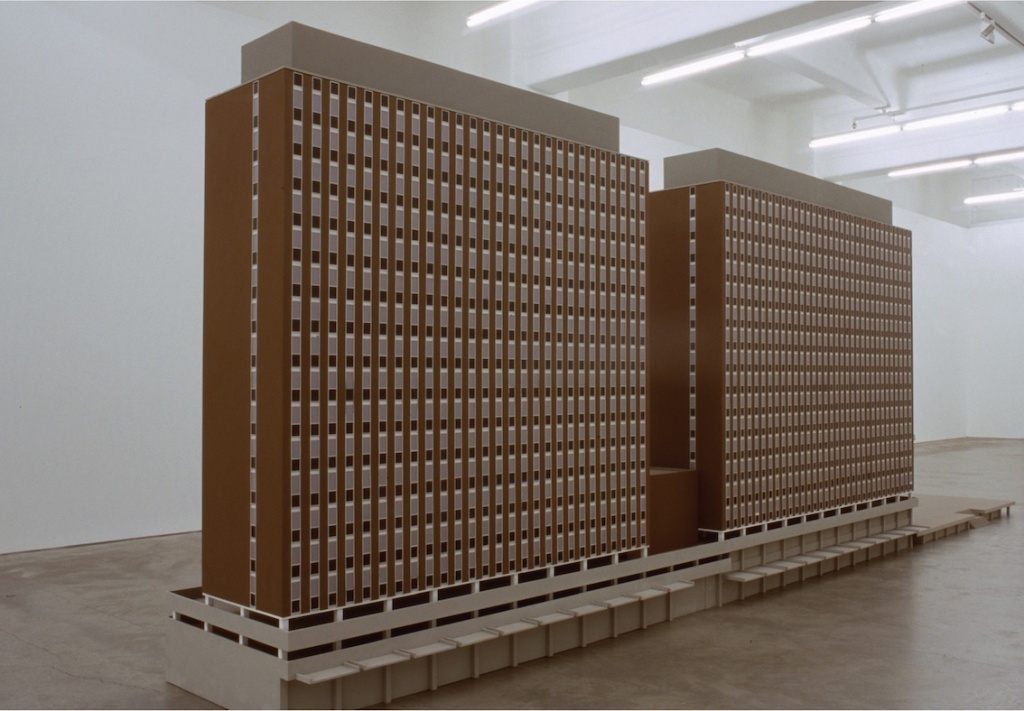 Typically his models have been animated through the use of light and sound, their counter-narratives drawn from movies, books, historical records, hearsay, legend, or his own life. Gunshots and screams break out at a party inside the Farnsworth House, a cine-style murder reflecting the public row over the house between Edith Fransworth and Mies van der Rohe.

Philip Johnson’s Glass House is cast as an abandoned, ransacked gas station in the middle of nowhere, petrol dangerously pooling on the apron, muzak still playing, explosion imminent. Moshe Safdie’s Habitat, a utopian experiment in collective housing at the tail end of the 1960s, is punctured by events erupting within some of the 354 housing modules (a domestic quarrel, bad TV blaring, morning ablutions). Cook’s Cottage, a prominent tourist attraction in Melbourne, relocated brick by brick from Yorkshire to commemorate the European founding of the city, is downscaled and air-freighted back to the UK with Cook crying out inside. Melbourne’s former Gas and Fuel Corporation Towers, destroyed to make way for a new city square, contains a child’s voice calling for help. 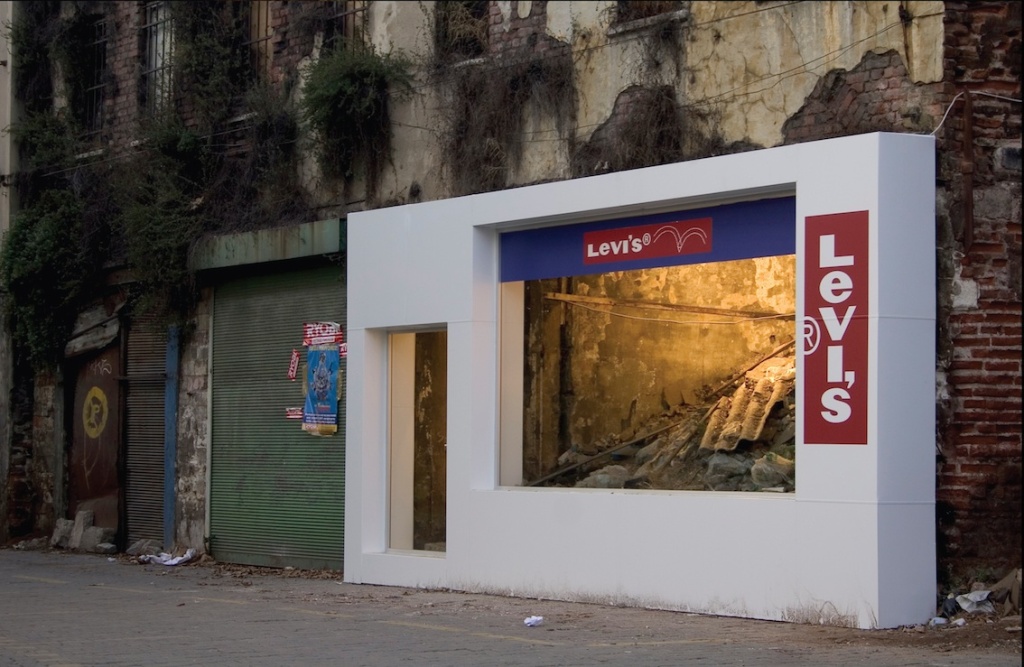 Morton also produces works approximating the real scale of architecture. Within a Warsaw shopping strip, an empty shop was converted into a café Morton recalled from his student days, a remembrance of another time and place filtering up from beneath the Polish present. A shopfront gallery in Sydney was turned into a locksmiths (and permanently locked), another in Melbourne was clad with fake brick to deter entry. In the decayed, collapsing back streets of Istanbul, Morton inserted a brand-new Levi’s boutique shopfront, framing the dramatically lit rubble behind. Within an underground cave, just like the hiding place from which they hauled Saddam, existed not filthy squalor but a generic hotel corridor extending endlessly.

I’ve been startled by the roar of a ghoulish green monster straining to escape from behind bolted cellar doors. I’ve tried the tiny doorway that leads to an impossible space beneath the museum’s stairs. I’ve driven by a looming roadside hotel for which there is no turn off, no access, stranded in parallel to the traffic at three-quarter scale, but eerily illuminated at night by some phantom guest. I’ve passed through the doors of a museum as if swallowed by a shark. I’ve heard Le Corbusier die inside a model of Cabanon, his holiday shack on the Riviera, where he drowned in 1965. I’ve seen an abandoned freeway overpass tagged with ‘OSAMA’; kids playing war-games inside a model of the UN building; porn and ultra-violence projected from Le Corbusier’s Villa Savoy onto surrounding drive-in movie screens; other screens peppered with gunshot, blackened by fire-bursts, the earth around them pitted by falling bombs and blasts; other buildings devastated by falling meteorites. 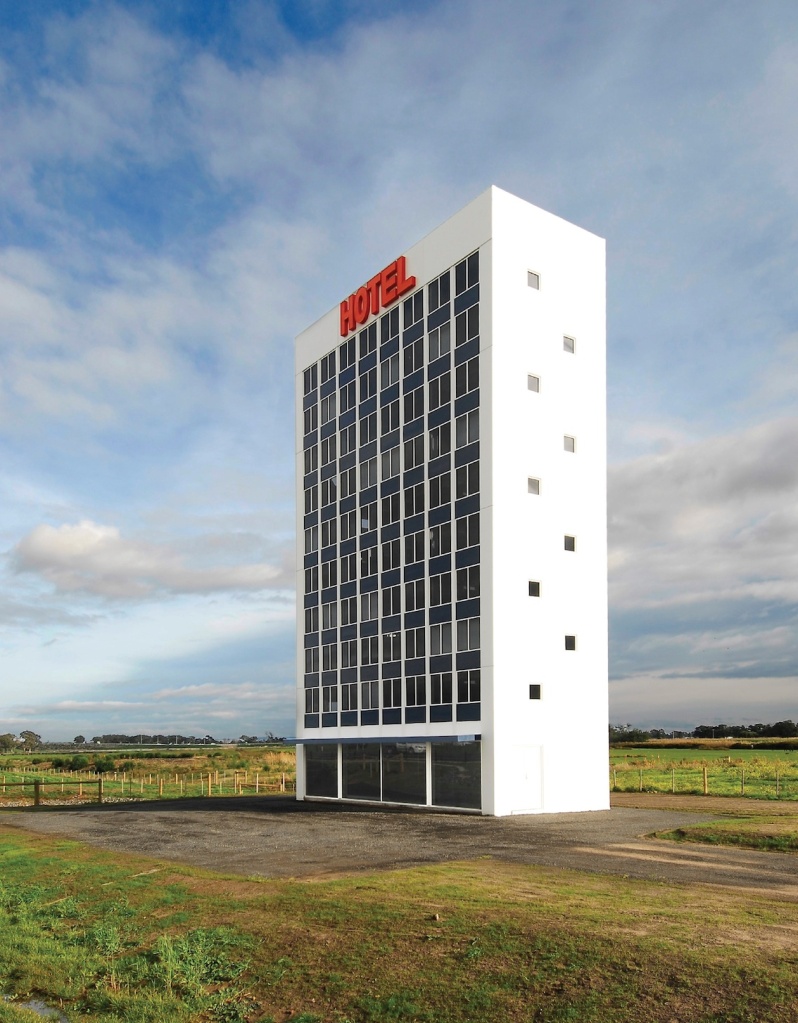 For fifteen years, Morton’s work has consistently plotted the demise or manifested the dysfunction of architecture and design, the ideal built environment inevitably succumbing to its worst prospects, ultimately destined for rubble, a return to ‘ground zero’, as they say. Indeed, following the first World Trade Center attack, architecture critic Herbert Muschamp wrote that exploding buildings were replacing buildings as landmarks. And really, there are too many examples of the strategic destruction of key architecture: the Dresden Cathedral, the Sarajevo Library, the Basri mosque at Ayodhya, statues of Saddam Hussein, the Buddhas of Baminyan, the second World Trade Center attack.

Morton’s bombed-out modernist house resembles some of those left standing in Lebanon, the Gaza Strip, Kosovo, Baghdad, and elsewhere. But this house is based on Morton’s family home, designed by his father, a modernist architect working in Australia. The house was briefly inhabited by Morton’s family before being sold to a developer – destroyed, reduced to rubble, the land excavated and a new, larger faux-‘period’ home built. The three-quarter-scale model appeared as a beautiful smoking ruin in the gardens of Palazzo Zenobio in Venice. Partly a gesture of high regard for his father’s practice and a reverie on his family life, it also appears devastated by a bomb blast, a symbolic act of terror in CAD, merging TV images of some kid’s devastated home with Morton’s own relatively peaceful private life in middle-class Melbourne. 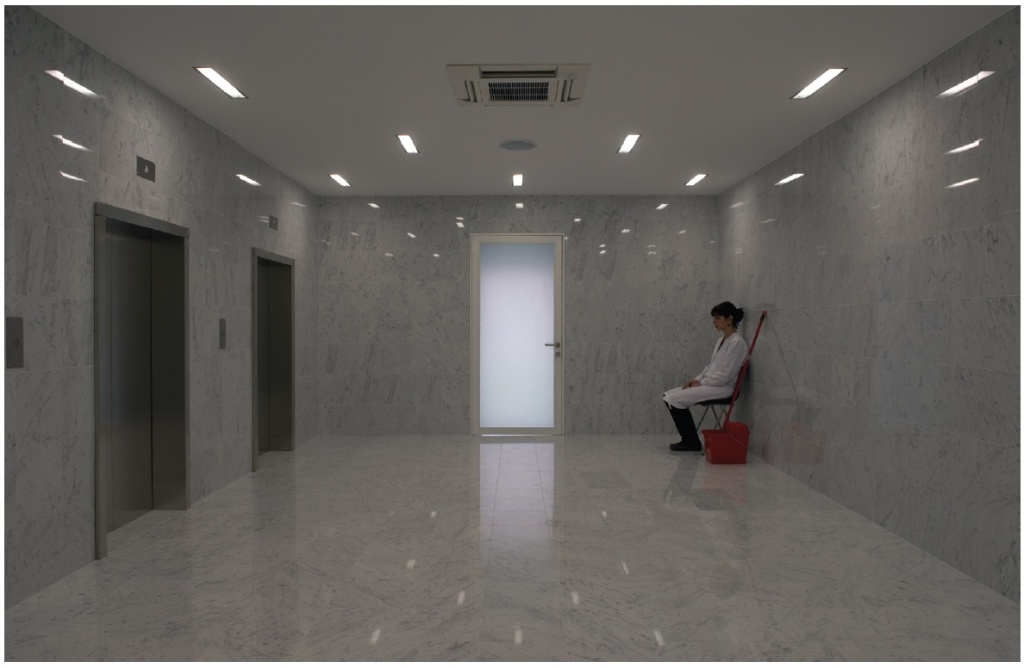 Indeed, here, Oedipus meets Osama. The family home is a complex zone in which the century’s major narratives manifest in our own conflicted personal experience. On entering Morton’s model, you encounter a blinding white foyer with three lifts all going down, as if they are the transport of childhood dreams and memories, unspoken fears, and guilt that erupt within to distend and buckle outward appearances. If Freud had ever designed a house it would have looked something like this, the concrete manifestation of disturbing subterranean events, the return of the repressed, the unconscious of architecture, exploding as it does from within all of Morton’s work.